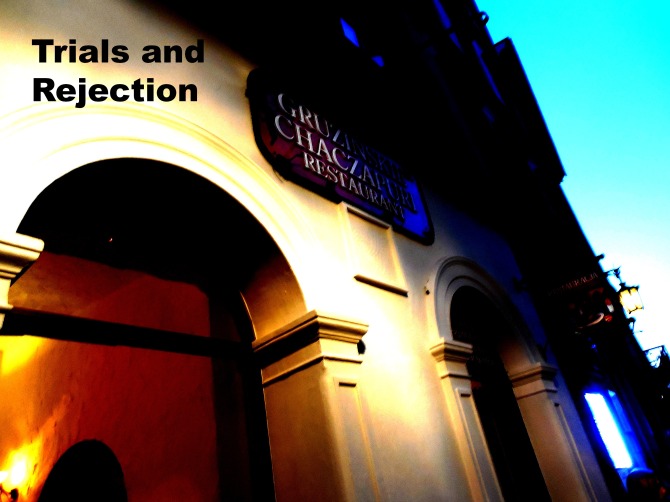 Common sense would make you think that if you want to get the most out of life and everyday experiences, you would receive much more if you lived with confidence, strength, and security. Finding a good balance of these three characteristics may take you far, but still it takes more to go far in life.

Everybody has to face rejection and facets of negativity. The ability to bounce off of negative thoughts or reactions of others takes practice and requires resilience.

Take for example an encounter that I just witnessed at a coffee table at Barnes and Noble. A young man was having a long conversation about work, personal issues, and affairs with a barista girl across the counter. After a good conversation of over ten minutes, there was another young man who was sitting at a coffee table who seemed to be frustrated. After a break in the conversation, the man sitting at the table turned around and told the boy conversing with the barista girl that he should apply for a job with Barnes and Noble or Human Resources, so he can deal with other people’s problems. The man who was at the counter then reacted and said that he already had a job and that he wasn’t interested. This was not a satisfactory response for the man sitting at the coffee table. He told the man at the counter what he thought he should do. Get a job where he can talk all day; because he couldn’t handle sitting and listening to the conversation while he had to concentrate and focus. After hearing this conversation I had a good laugh and couldn’t help but hold a smirk on my face. Although the confrontation wasn’t too vulgar, I understood that their were a few feelings going on. A sense of jealousy and a sense of trying to put down the other opponent.

What I’m trying to relate to the audience in this lesson are a few things. In order to carry through trials of rejection you have to carry a fighting spirit and the ability to not let others put you down. One thing that everybody inevitably has to face is that some people will always try and put a negative spin on your day or take down your vibe.

The lesson that has to be learned is within. You have to learn to not give a flying hoot what others say or think and just carry on. Learn to smile or brush off what the other person says. Talk is cheap, so you can’t let little words get to your head or sway you in the wrong direction. It takes some practice, but if you can learn to compliment the other person or just laugh off something that another person says to you, you’re a pro.

If you add resilience to the suitcase of your personality that you carry with you across the world, you never know what magic you can cultivate. Learn to master and sharpen your current deck. Test out new scenarios and everyday confrontations. Just through observation you can learn something new everyday!

This site uses Akismet to reduce spam. Learn how your comment data is processed.